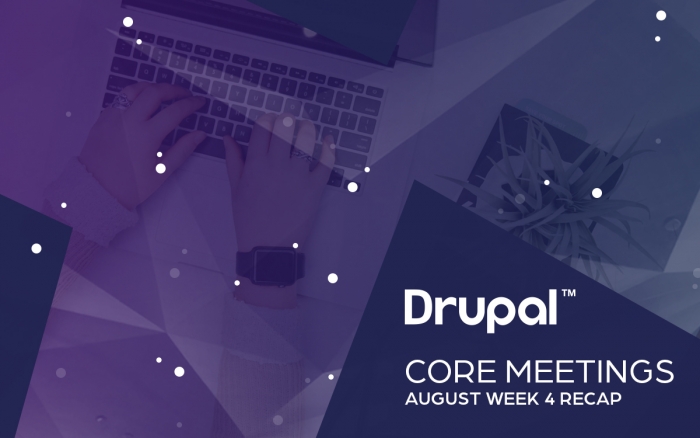 Our lead community developer, Alona Oneill, has been sitting in on the latest Drupal Core Initiative meetings and putting together meeting recaps outlining key talking points from each discussion. This article breaks down highlights from meetings this past week. You'll find that the meetings, while also providing updates of completed tasks, are also conversations looking for community member involvement. There are many moving pieces as things are getting ramped up for Drupal 9, so if you see something you think you can provide insights on, we encourage you to get involved.

We've had some gaps in August with limited meetings, so we're happy to be back in the swing of things and reporting a lot of great updates.

The active issue [meta] How to deprecate Simpletest with minimal disruption is one of the biggest deprecations in Drupal 8 while being one of the least trivial to update for, however, work on it is still a priority.

The issue Add drupal/core-filesecurity component for writing htaccess files has been fixed.

The issue Relocate Scaffold plugin outside of 'core' directory has also been fixed.

The issue Add Composer vendor/ hardening plugin to core is ready to be reviewed.

We have the current template files but still needed are the scaffold files as well as the vendor hardening plugin. Then we will be able to make a template that can be used to make a tarball.

Drupal.org changes to support this

There are currently no blockers.

There are currently no blockers.

There are two issues the release manager needs to review.

There are two patches waiting to be committed.