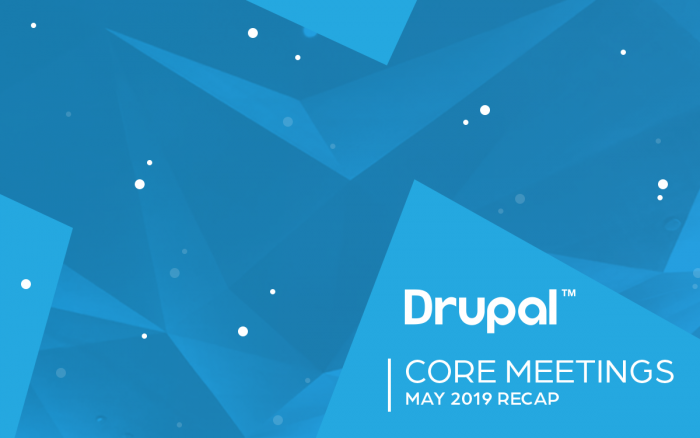 Our lead community developer, Alona Oneill, has been sitting in on the latest Drupal Core Initiative meetings and putting together meeting recaps outlining key talking points from each discussion. This article breaks down highlights from meetings this past May. You'll find that the meetings, while also providing updates of completed tasks, are also conversations looking for community member involvement. There are many moving pieces as things are getting ramped up for Drupal 9, so if you see something you think you can provide insights on, we encourage you to get involved.

Opened an issue today to track these and currently working on Drupal 9 plan summary via https://www.drupal.org/project/drupalorg/issues/3046058.

To avoid this problem in Drupal 10, we are proposing to not ship Classy as part of Drupal 9. The feature gap would be replaced with a new starter kit theme.

An extensive review was completed of the Drupal 9 docs. The review yielded grammatical improvements to improve English formatting.

New Critical for the D9 Roadmap

There's some discussion already in the other meta https://www.drupal.org/project/drupal/issues/2866082.

Freezing entity schema updates between 8.9 and 9.0

Currently, when using Layout Builder, the already added sections give no indication of their layout or its configuration. This isn't a big deal for sighted users who are only using the default Layout Builder layouts, because the only configuration is the widths of the columns, which they'll be able to see visually.

However, for non-sighted users, or if a layout has more complex configuration (for example, using different proportions for different view port sizes, or adding class names, or anything since layout plugins have full control over their settings and rendering), then there is no indication given of the section's layout or its configuration.

An issue was created to document this concern.

Check back for frequent meeting recaps to gather insights on the latest Drupal Core developments and find ways to get involved. Our community thrives when we all come together!