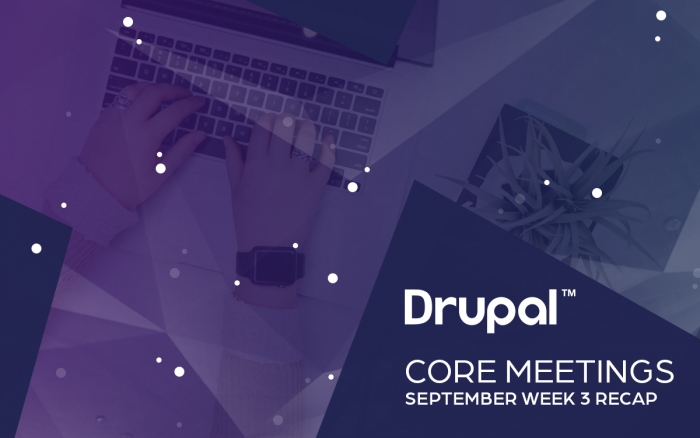 Our lead community developer, Alona Oneill, has been sitting in on the latest Drupal Core Initiative meetings and putting together meeting recaps outlining key talking points from each discussion. This article breaks down highlights from meetings this past week.

Chx suggested splitting the MySQL and MariaDB drivers eventually as they continue to diverge.

Drupal 8.8 is the deadline for:

There’s been lots of work recently by Amit Goyal, Rohit Joshi, and Pranit Jha to add Drush 9 support and make the transformations produce Drupal 9 compatible results. They also made the test suite green with lots of work and are looking into the possibility to write new transformations with rector. Unfortunately, due to conflicts of dependencies, rector cannot be added to a Drupal instance without Support PHPUnit 7 optionally in Drupal 8, while keeping support for 6.5 being resolved.

We have several options for defining the default:

We did a Claro demo and found some bugs. The first one for messages, without icon and title and working on that in a follow-up.

Cristina Chumillas talked about UX with the following update:

Andrei Mateescu talked about Workspaces with the following update:

Lucas Hedding gave an auto updates with the following update:

Ryan Aslett gave an update on Composer with the following update: