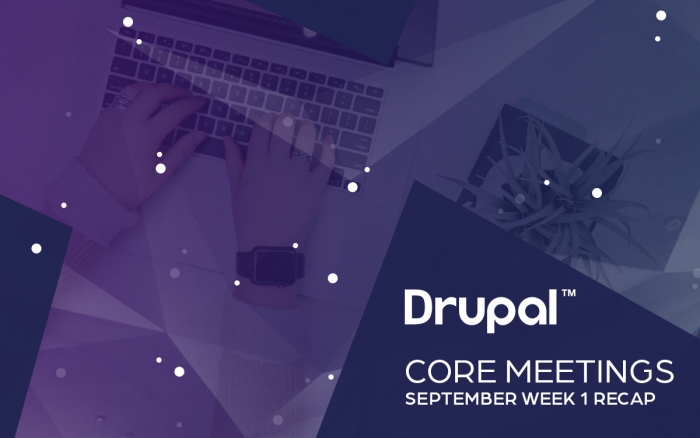 Our lead community developer, Alona Oneill, has been sitting in on the latest Drupal Core Initiative meetings and putting together meeting recaps outlining key talking points from each discussion. This article breaks down highlights from meetings this past week.

To follow up, the issue Don't catch exception for invalid 'core_version_requirement' in info.yml files was opened and Gábor Hojtsy posted Drupal 8.7.7+ will support extensions compatible with both Drupal 8 and 9! to explain the multi-version support in the newest release.

There is also a fallback date on the week of October 14th, alongside 8.9's branching [META] Requirements for opening the Drupal 9 branch.

Today some concerns were raised about the last issue for underlining link.

There are two proposed options to solve the issue.

The current design of action links leads to several issues:

In the last revision, we had with Product Management for Claro we had some feedback that we need to address before adding Claro to core.

Some initial tests are moving this way.

While working toward issue 2982680: Add composer-ready project templates to Drupal core, we discovered that the Vendor Hardening Plugin sometimes fails to work, throwing an error. The issue is documented in Move Drupal Components out of 'core' directory.

Ryan Aslett summarized: Duplicate the contents of core-file-security into core-vendor-hardening because core-vendor-hardening is unable to find core-file-security when composer-installers move it due to the composer's behavior regarding plugin interaction. Moving all of the components might have other consequences and require additional efforts that we eventually want to tackle, just not right now.

The templates we have so far look good, once vendor hards things the question is, will they be done? The tests are probably not something we want in drupalci like that. Possible we should wait for Add a new test type to do real update testing to add tests. It's okay to add this to core without tests for the time being.

Potential conflicts have been uncovered and need to be addressed.

Angie Byron has been trying the past couple of days to get up to speed on the autoupdates initiative. Work is happening at https://www.drupal.org/project/issues/automatic_updates and it seems they’re going a “quasi-patch” approach doing in-place updates. You can find Greg Anderson's summary within the issue comments to follow along.

Great progress is being made, and there are a lot of issues that are awaiting review.

31 days of migrations have been an outstanding success, thanks to Mauricio Dinarte and his brother! How best can we include these guides in the official documentation and make sure that they are disseminated to those who could use them? Mauricio suggested: