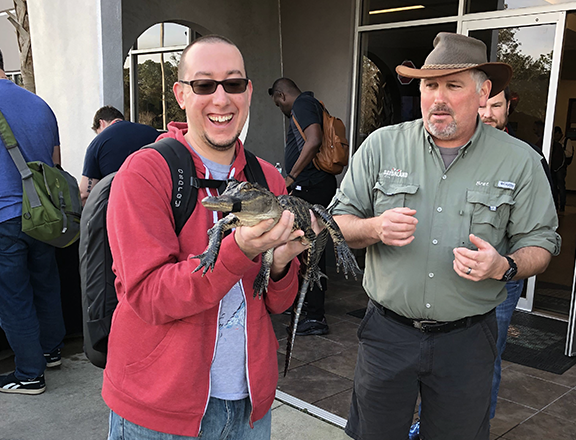 Every year community members from across the globe meet in Orlando for Florida Drupal Camp. This year Adam, Ryan, and Jonathan from Hook 42 attended. It was a fantastic time to connect with people, to learn, and enjoy some warmer weather. Plus, alligators!

Ryan and Adam led a training on connecting Drupal 8 and Gatsby.JS. The training utilized a set of Docker images that help people build everything from end-to-end on their own system. Attendees used the Umami demo, installed JSON API, and configured Gatsby.JS to pull recipes from Drupal. It was well attended and there was a lot of collaboration in the room. Our team appreciated all of those that attended - especially as we worked through technical and wifi issues.

Ryan and Adam also gave a talk on emerging technology related to Drupal. Some of the topics included Cypress.io, Hubspot, ElasticSearch, GraphQL, Gatsby.JS, and Pattern Lab. It’s important for community members to find and use the right tool for the right job. As Drupal community members, we must be mindful of how these complementary technologies can serve us. You can watch the recording of the session on Drupal TV.

I look forward to this camp each year, and once again this year did not disappoint. Thank you to “the Mikes”, Kyle, and Jordana for volunteering again. The time spent with the community was uplifting and encouraging - even if it was a bit tiring giving both a training and a session. The time spent with my colleagues Jonathan and Ryan, having barbeque, and drinking craft beer with the community all brought a lot of energy. I was able to reconnect with many friends and I always treasure those opportunities. Also, Jonathan and I unintentionally packed the same hoodies and Drupal Camp Asheville shirts. Twinsies!

The session quality was outstanding! Most notably, there were some incredibly great non-technical, people-focused sessions provided by Jordana Fung and Qymana Botts. I strongly recommend seeing both. Thanks, as always, to the amazing Kevin Thull, all sessions are recorded and posted to Drupal TV.

At the end of camp, on the contribution day, I was able to work on the proof-of-concept integrating SimplyTest.me and Tugboat QA. The result of which is a new Tugboat QA contributed module based on a Backdrop CMS module port.

This wasn’t just my first time to Florida Camp, it was my first time in the state of Florida in general! What a great experience. I had a great time at the camp and really enjoyed speaking with a wide array of folks about decoupled Drupal and Gatsby.js, both through the training Adam and I conducted as well as hallway conversations. Brian Perry’s talk comparing various static site generators and their compatibility with Drupal proved really insightful. I was really excited about his demo of the Tome static site generator, which runs within Drupal itself.

Thanks a ton to the organizers - the camp was a lot of fun and I look forward to attending again next year!

As an attendee, I had a unique (for me) experience this year. I went to Drupal Camp Florida without a computer and it was great! Without a laptop always in front of me I found myself more attentive to the session and more engaged in the camp in general. I enjoyed it so much that I will likely avoid taking my computer to future camps.

The sessions I attended were all wonderful and there are a few I’m still thinking about today. Here is a quick list, and my takeaways:

Another top-notch Drupal Camp Florida in the bag. I’ll definitely be back next year, and if you’ve never been I highly recommend it.