How to Streamline Update Hooks Using the Batch API 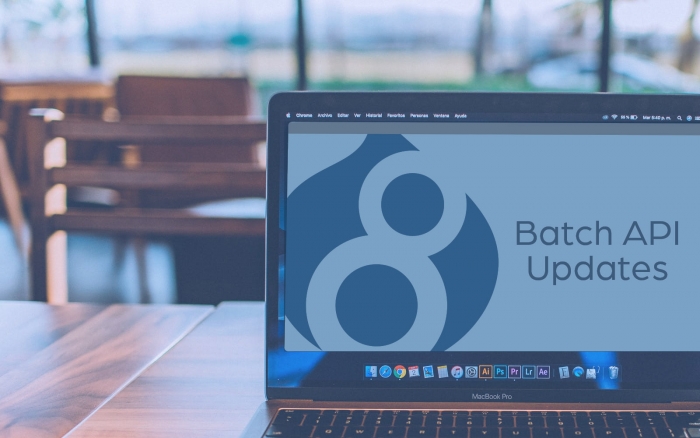 When maintaining a Drupal 8 site in production, it’s often necessary to make changes within the site’s database, specifically when it comes to modifying settings or data that is not handled by Drupal’s YAML file-based configuration management API. Some common examples of settings or data not handled by the configuration management API include the following:

It’s fairly common that the needs of clients may necessitate changes to such data and settings. When that is the case, Drupal’s Update API provides an efficient, well-documented method for making changes to the database layer. The basic methods of tapping into the Update API are either (1) via an implementation of the hook hook_update_N() within the MODULE_NAME.install file in a custom module, or (2) via an implementation of the hook hook_post_update_NAME() within a MODULE_NAME.post_update.php file in a custom module. In case you’re not familiar with writing update hooks in general, my previous blog post provides a good example of what one might look like.

Deciding Which Update Hook to Use

If you are researching Drupal’s Update API you may find that the majority of tutorials focus on implementations of hook_update_N() rather than hook_post_update_NAME(). There is one key difference between the two hooks that you need to consider when choosing which one to implement: hook_update_N() is primarily meant for making changes related to configuration and/or database schemas (i.e., structural updates to a site), as suggested by the Drupal.org documentation. For this reason  hook_update_N() should not be used for CRUD operations to update entity data (e.g., the field values on specific nodes), because “loading, saving, or performing any other CRUD operation on an entity is never safe to do (because these tasks rely on hooks and services)”. Instead, if you need to update data like entities, you should implement hook_post_update_NAME(), which Drupal runs in a fully loaded state with all of its APIs available, after any hook_update_N() implementations are run.

In the example below, we will be implementing hook_post_update_NAME() in order to programmatically update hundreds of node field values.

Pushing the Boundaries of your Update Hook

More often than not, you’re probably used to implementing update hooks to achieve relatively simple and straightforward tasks, such as programmatically updating a field value across a handful of nodes. However, because Drupal is so good at being able to store massive amounts of content, sometimes you’ll need to update more than just a handful of nodes. Instead, you might need to update hundreds, if not thousands, of entities all at once.

Technically, you could write your update hook in such a way that those thousands of nodes are updated at one time, one immediately after the other. While that might work fine locally in testing, when you don’t care as much about performance, that style of memory-intensive or long-running update could pose a serious threat to the stability and performance of your site during deployment.

Instead, when it comes to implementing such memory-intensive update hooks, it’s best to reach for Drupal’s Batch API. Luckily, Drupal has made this relatively simple to do when implementing update hooks specifically. In the documentation for hook_update_N() and hook_post_update_NAME(), batch updates are explicitly mentioned as a best practice “if running your update all at once could possibly cause PHP to time out.” As stated in that same documentation, “in this case, your update function acts as an implementation of callback_batch_operation(), and $sandbox acts as the batch context parameter.” To see what this means, it’s probably easiest to look at an example.

Batch API: the better way to process thousands of node updates in one go

The following code is an update hook that I recently had to implement. Within this update hook, the code comments will describe how I was able to use Drupal’s Batch API within the hook, in order to ensure that I could process hundreds of node updates without significantly affecting the live production site’s performance.

In summary: for every FOO node, make sure there is also a BAR node. Currently, many FOO do not have a corresponding BAR. Let’s begin!

As seen in the code above, Drupal’s Update API makes it relatively straightforward to quickly leverage its Batch API for memory-intensive and long-running update operations. With everything being managed by a simple $sandbox array of variables, we can tackle even the largest update operations on our sites with simple, yet efficient, batched processing.