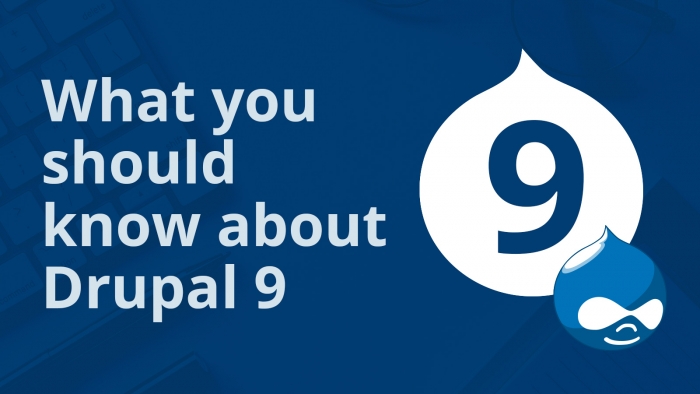 This article is a summary of the state of Drupal 9 along with lists of key dates, ways to contribute, and other resources. If I missed any important information or there's a mistake, please contact me via email or, more reliably, via Twitter, and I'll try to update the post quickly.

In this article, I will cover:

According to the Drupal.org D9 docs:

"Drupal 9 will be a cleaned-up version of Drupal 8. It will be the same as the last Drupal 8 minor version with our own deprecated code removed and third-party dependencies updated."

This is good news as it makes updating from Drupal 8 to Drupal 9 much, much easier than for previous major version updates. To see a video of updating a simple site, check out the DrupalCon Amsterdam Driesnote starting at around 43:10 minutes. And, to get a really nice overview of the Drupal 9 release, I highly recommend looking at the D9 slides created by Gábor Hojtsy. As an added bonus, these slides have been made available for anyone to present at any event around the world.

The two areas that need to be addressed to make Drupal 9 a reality are 1) removing deprecated code, and 2) updating third-party dependencies.

The most pressing lifecycle impact is that Symfony 3 has an end of life in November 2021. Drupal 9 will use Symfony 4.4 which was recently released. To give ample time to update Drupal 8 sites, the D9 planned release date is June 3, 2020. If that date slips, the backup plan is to release Drupal 9 by the end of 2020. See the estimated dates below.

Here are some approximate Drupal stats based on recent data. Note: Some drupal.org issues aren't tagged "properly" so there may be other issues not represented below.

Future dates are estimated and are based on major and minor releases. The releases are happening every 6 months on the first Wednesday of the month. Additional dates are available in the release cycle documentation.

Lots of people are working on Drupal 9, but here are the coordinators from the D9 initiative page.

Drupal 9 is always changing, so here are some ways to keep in the loop.

Even if you don't have your own Twitter account you can check these accounts for regular Drupal 9 updates.

Drupal 9 readiness meetings generally happen every 2 weeks on Mondays so you can join the meeting (in Slack) or check the meeting notes afterward.

There are many ways to contribute to Drupal 9. Remember, you don't have to be a coder to help out! Here are some ideas:

After a discussion in November in the Slack #d9readiness channel with Gábor Hojtsy, we've clarified the tags that should be used. Please avoid using other tags and use the following, so that it is easier to find issues to work on. At that time, I went through many issues to update their tags to match these guidelines. There are likely some that were missed, so if you see issues that aren't tagged or are using different tags, please update them. When making new issues, keep these in mind as well.

There are lots of contributed D8 projects that can be updated. Check the issue queue first to make sure the project doesn't have an issue created already. Then you can use the deprecation checking tools to see if there are issues. If there aren't deprecation problems, it's still good to create an issue and then mark it as fixed so it's clear that the code has been checked.

When creating new Drupal 9 issues for contributed projects, please use the "Drupal 9 compatibility" tag rather than other D9 tags that are listed above. When creating new Drupal *core* issues, you don't have to tag them as long as you're using the 9.0.x-dev or 9.1.x-dev for the version. If you have a Drupal 8 issue that needs to be tagged for D9, use the "Drupal 9" tag.

You can search for issues using the Kanban boards and issue queues (see above). If you know how to create patches, many of the updates are straightforward. The issues should have a report of what is deprecated and needs updating. If not, use the deprecation checking tools. If you don't know how to create patches, but can review code, you can review existing patches to make sure they fixed the deprecations correctly.

There are some experimental projects that need finalizing before 8.9 so they will make it into D9 as stable. Here are some issues that you can help with to make that happen.

There are always strategic core initiatives in progress, and there are some exciting ones for Drupal 9 that could use your help. If you have ideas for other initiatives, discuss your ideas in the #contribute Slack channel.

In addition, there are some active D8 initiatives that will benefit Drupal 9. Some are more active than others. Check out the issue queues for activity:

Training, Speaking, or Mentoring at Events

Spread the word about Drupal 9 by going to local, regional, or international events. Check out Drupical to find Drupal-specific events, but also consider going beyond these into the wider tech world to help with Drupal adoption. If you like speaking at events, Gábor Hojtsy has provided "State of Drupal 9" slides for anyone to use. If you find any mistakes or have suggestions, leave comments on the slides. For contribution sprints, you can mentor other community members and help them work on Drupal 9 issues.

There are many Drupal 9 resources available, but here are some to start with:

"The big deal about Drupal 9 is … that it should not be a big deal." -Dries

p.s. A big thank you to Lindsey Gemmill for her review and painstaking formatting of this post! And thanks to Gábor Hojtsy for reviewing and providing feedback and more resources.